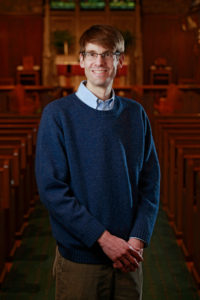 Brian Preston Harlow serves as Organist and Choirmaster of St. Luke’s Episcopal Church in Gladstone, NJ, Director of the Rutgers University Chorus, Newark Campus, and Director of the Apprentice Chorus and music theory teacher at the Newark Boys Chorus School. He is also on the staff and board of Music in the Somerset Hills. Dr. Harlow frequently performs throughout the United States and Europe, often collaboratively with choirs, instrumentalists, and with Christopher Jennings as Duo Organists.

Dr. Harlow holds the degrees of Doctor of Musical Arts, Master of Musical Arts and Master of Music from Yale University School of Music, as well as the Bachelor of Music degree with High Distinction from Indiana University School of Music. He received a number of prestigious awards from both schools and from the American Guild of Organists. Dr. Harlow is also the Instrumental Music Reviewer for the Journal of the Association of Anglican Musicians.